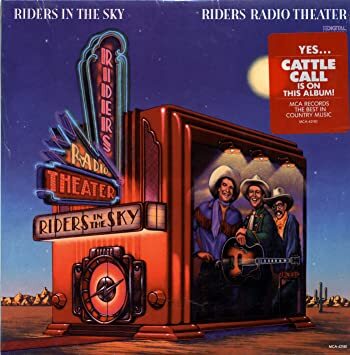 Is this the end of Riders in the Sky?!
—Too Slim, on too many occasions to number

Riders Radio Theater, was a Radio Drama (well, comedy/drama) performed by Riders In The Sky that aired on National Public Radio regularly from 1988 to 1995. Set as an anachronistic western melodrama, the stories follow Ranger Doug, Woody Paul, Too Slim and their compatriots as they fumble, yodel, and hero their way through misadventures and regular adventures - usually opposite the villainous A. Swinburne Slocum and his henchman Charlie.

As the show is a satirical take on actual radio melodramas, it is rather Troperiffic and the Fourth Wall takes a heavy, heavy beating. The characters all alternate between varying degrees of Genre Savvy and Genre Blindness from moment to moment depending on what best entertains, and the writing is definitely not above invoking Meta Humor.

Recorded live at the Tennessee Performing Arts Center in Nashville, Tennessee and Emory Theater in Cincinnati, Ohio (The Queen City of the West), the show not only had story exposition but also featured musical guests and short comedy skits. The weekly show began in 1988 and ended in 1995, but returned in 1998 to the early 2000s as occasional specials.

Bosco Bell: ...Not only that, but Warner Brothers is talking about starring Riders In The Sky in a remake of Wuthering Heights. What do you think about all this, cowboy?
Ranger Doug: Well Bosco, we don't try to understand 'em, we just rope, tie, and brand 'em