Music / Riders In The Sky 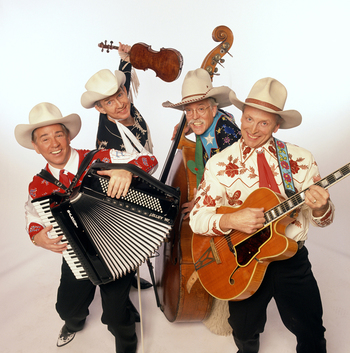 From left to right: Joey The Cow-Polka King, Woody Paul, Too Slim, & Ranger Doug.
Riders In The Sky is a Grammy award winning country/western band that first began performing on November 11th, 1977. The band consist of Ranger Doug (Douglas B. Green) on rhythm guitar, Woody Paul (Paul W. Chrisman) on fiddle, Too Slim (Fred LaBour) on bass, and Joey The Cow-Polka King (Joey Miskulin) on accordion. Over the course of their long and semi-illustrious career, they've released 35 albums over the course of 40 years, hosted and starred in numerous television shows and specials, including the TNN series Tumbleweed Theater for three seasons, their own CBS children's show in 1991, and created the National Public Radio series Riders Radio Theater which ran for 15+ years, but they are perhaps best known for singing Woody's Round-Up in Toy Story 2.