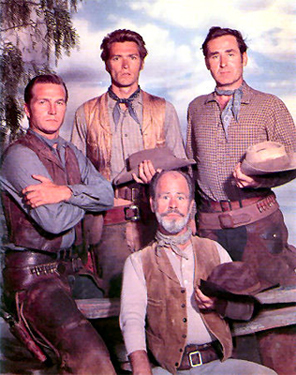 One of the many Western-themed television series that filled the airwaves in the mid-20th century, Rawhide aired on CBS from 1959 to 1965, the twilight years of the Golden Age of the Western.

It starred Eric Fleming as trailboss Gil Favour, a taciturn Team Dad, and a young Clint Eastwood as "Rowdy" Yates, his protege on the cattle trail. For eight seasons, the team of cattle men drove heads of steer along the Sedalia Trail from Texas to Missouri. Which all looked remarkably like Southern California.