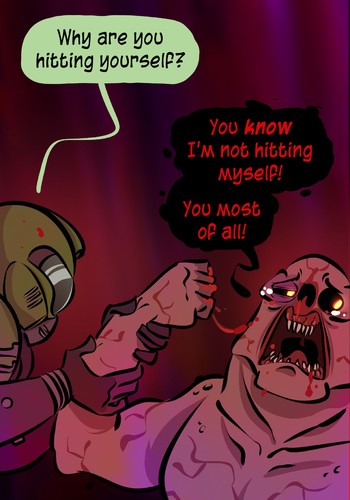 Why use a BFG, when your enemy's fist is already there?
"When I was a boy, my big brother held on to my hands, then he made me slap my own face.
I looked up to him then, and still do.
He was trying to teach me something,
and now I know what it was, now I know what he meant, now I know how it is!

One must eat the other who runs free before him. Put them right into his mouth
while fantasizing the beauty of his movements,
a sensation not unlike slapping yourself in the face..."
— Jane's Addiction, "Of Course"
Advertisement:

This trope is about a tactic, either bullying or combat, that consists of forcing/making someone hit themselves. Deals both physical and psychological damage. Especially when it's about bullying, expect The Bully to taunt the victim "why do you keep hitting yourself?" or, even more often "Stop hitting yourself!", hence the trope name.

In more dramatic examples, someone might have a piece of their person removed and used as a weapon against what remains of them. Especially when Only Like Can Cut Like, the easiest way to do it is to take a piece of that "like" to harm the rest of it. A weapon system could be turned against its own platform. A projectile may be reflected or caught and returned back at the attacker. More fantastic examples might even include a duplicate being created to attack the original or someone being forced to fight a time displaced version of themselves. If you've got psychic powers, maybe you can make people physically lash out at themselves or endlessly fight themselves in a nightmare? To a director, just seeing the actor fumble around on the green screen could be worth it.

Related to Why Did You Make Me Hit You?, which is about shifting the blame from the perpetrator to the (particularly weak-willed) victim, which may go hand in hand with this trope. Compare Attack Reflector, Catch and Return, Deadly Dodging and Misguided Missile. Compare Primal Chest-Pound, when someone purposefully hits oneself on the chest to show off one's fierceness and toughness. Likewise compare Kicking My Own Butt, when someone voluntarily beats themselves up for some reason, and What the Fu Are You Doing?, when the reason is simple clumsiness and trying techniques/weapons too advanced for the wielder. Compare and contrast Attacking Through Yourself, when someone deliberately hurts oneself to attack someone who cannot be reached otherwise. People Puppets is a particularly effective way to play this game. Not to be confused with Self-Harm, when someone deliberately hurts (often hits) oneself because of a psychological problem. Super-Trope to Psychic-Assisted Suicide, Sub-Trope to Hoist by His Own Petard.

Flynt, a juvenile gorilla plays the punch yourself game with his friend Mungo.

Flynt, a juvenile gorilla plays the punch yourself game with his friend Mungo.