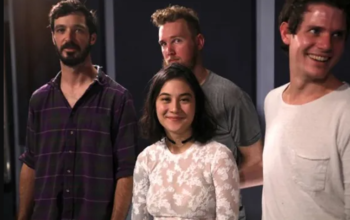 Michelle Zauner is at the center. From left to right: Craig Hendrix, Deven Craige and Peter Bradley
Advertisement:

Japanese Breakfast is an Alternative Pop band fronted by American Singer-Songwriter Michelle Zauner who pens all of the band's songs. Other band members include Craig Hendrix, Peter Bradley and Deven Craige.

Michelle started her music career in 2009 with the band Birthday Girlz and she later formed the punk act Little Big League in 2011. The band dissolved after Michelle decided to focus on a solo career under the Japanese Breakfast moniker. Notable themes in her music are her Asian American heritage and the passing of her mother and how she grieves through it. Another side-project of hers is BUMPER, a collaboration with Ryan Galloway (of Crying fame). On top of the music she produces, she's also directed some music videos for them.

Fitting with the name of her band, Michelle is also a writer whose main field of work is Asian food. She released a memoir called Crying in H Mart which went on to be a New York Times nonfiction best-seller.

Their work contains examples of: