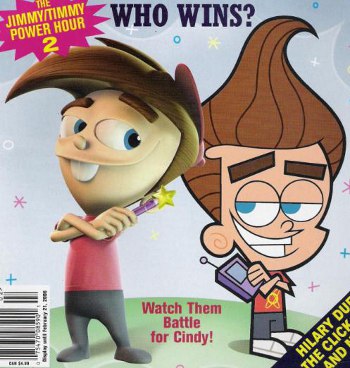 The Jimmy Timmy Power Hours are a trilogy of hour-length specials produced for and aired on Nickelodeon in 2004 and 2006. As suggested by the title, they are a series of Crossovers between two of the network's most popular cartoons, the Jimmy Neutron franchise and The Fairly OddParents.

It all starts in the first special, when Timmy, in need of a good science project, wishes to go to "the greatest lab in the universe", and Cosmo and Wanda transport him to Jimmy's not-so-secret lab. An accidental meeting between the two results in Jimmy getting transported to Timmy's world, where he mistakenly believes Cosmo and Wanda are some kind of advanced holographic computer programs (because he thinks Timmy is also a genius and is also too scientific minded to believe magic is real), and Mr. Crocker steals his transportation device, which he then uses to take over Fairy World. Back in Retroville, Timmy develops mutual affections for Cindy Vortex and accidentally turns Goddard into a killer robot based on "Decimator", his favorite video game. The boys eventually manage to solve their respective problems and return to their own worlds, and all ends well...

...Until two years later, when the second installment, When Nerds Collide!, came out. Timmy is looking for a date for the Friday the 13th school dance, and since Trixie Tang isn't around for him to unsuccessfully ask out, he goes to Retroville again, this time taking Cosmo and Wanda with him, so he can get Cindy to go out with him. This naturally does not sit well with Jimmy. As if that weren't enough, Professor Calamitous is on the loose again, and so are the Anti-Fairies.

Finally, in the third special, The Jerkinators!, Timmy and Jimmy put aside their differences and start hanging out together. They grow bored with their outmatched villains and create a new villain to fight. But things take a turn for the worse when this new villain, named Shirley, steals Cosmo and Wanda's magic powers and Jimmy's intelligence!

Outside of these specials, Jimmy and Timmy would join forces a few more times in the Nicktoons Unite! video games. See also Rugrats Go Wild! for another Nicktoon crossover.

Not at all to be confused with Jimmy Neutron Happy Family Happy Hour, though the name was likely inspired by this.