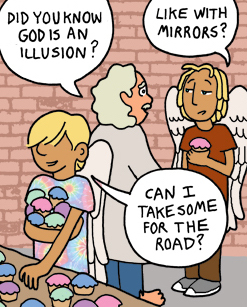 "It was all very well going on about pure logic and how the universe was ruled by logic and the harmony of numbers, but the plain fact of the matter was that the Disc was manifestly traversing space on the back of a giant turtle and the gods had a habit of going round to atheists' houses and smashing their windows."
— The Colour of Magic by Terry Pratchett
Advertisement:

Atheism in a clockwork universe ostensibly overseen by a completely non-interventionist divinity is one thing, but what about a world that's practically the playground of the mythic forces that created it?

While some authors do this as an honest philosophical exercise, it's almost always Played for Laughs. A self-styled hardline atheist that just happens to live in a high fantasy setting brimming with both huge pantheons of gods rampaging around the landscape constantly causing all sorts of things to happen, and the worshipers that pray to (and immediately hear back from) said pantheons of rampaging deities. Maybe they don't believe in the gods at all and are totally nuts, maybe they're completely in denial about the existence of gods, or maybe they're feigning disbelief in hopes of ending their worship and bringing about some kind of Götterdämmerung or whatever. Sometimes the character himself is a god (typically a loony one). Sometimes this is a direct attempt to discredit science by comparing it to religion: instead of using the scientific method, as a scientist does, the strawman atheist relies himself on a devout faith — in this case a faith that "science" holds all the answers, despite obvious proof to the contrary.

The trope can be justified in some ways. It's relatively common to have a character who openly acknowledges the existence of beings of great power, but refuses to accept their divinity (either because he believes them to be Sufficiently Advanced Aliens using technological trickery, or because he differentiates between a "real" god and a supernatural being that is merely very powerful). For instance, in The DCU (see below) there's no practical difference between, say, angels and alien energy beings. The main difference often comes down to whether or not the subject in question has deep personal implications, like an afterlife. On the other hand, in a world where magic is commonly known to be real, it becomes a lot easier for con artists to pull the wool over the eyes of innocents, so a skeptic to differentiate between "real" magic and "fake" magic can come in handy.

After a certain point, however, it can devolve into semantics, and you can start to wonder what exactly a character defines a god or magic as, especially considering some of the entities they encounter are even more powerful than most gods of myth.

A subtrope of this is the atheist who's plucked out of the normal world and forced to acknowledge the existence of the supernatural, usually only accepting it after something wildly impossible is done to them (like being turned into a dragon and back in C. S. Lewis' The Voyage of the Dawn Treader or having the flesh burned off his bones and regrown in Niven and Pournelle's Inferno (Larry Niven and Jerry Pournelle) — even then, it took a long time for the protagonist to drop the idea that it was a theme park for sadistic sufficiently advanced aliens).

Compare with Agent Scully; Magic Versus Science; Sufficiently Analyzed Magic; No Such Thing as Space Jesus; and No Such Thing as Wizard Jesus. See also Crossover Cosmology and Negative Continuity for two possible justifications, along with God Test, and Grumpy Bear. Sometimes one too many strange things happening will lead these characters into Giving Up on Logic. If the character does believe in certain fantastical aspects of their world but rejects others for no adequate reason, then you are dealing with Arbitrary Skepticism.

Don't confuse this with the Nay-Theist, who knows supernatural forces exist, but refuses to obey or worship them, often thinking that they should mind their own business and leave mortals alone. Also compare Eskimos Aren't Real, which is when a character does not believe in something that everyone else believes, but may in fact have never seen it. The trope also applies to other examples which aren't specifically atheism, but irrational disbelief in some things (such as ghosts) where incontrovertible proof exists of them being real. This also does not relate to atheists literally believing that the Earth is flat.

Cricket believes the earth is flat.

Cricket believes the earth is flat.