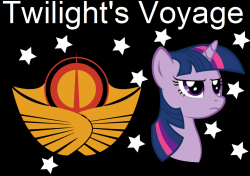 A Science Fiction Alternate Universe fanfic for My Little Pony: Friendship Is Magic.

Twilight Sparkle has lived on the Canterlot Space Station, capital of the Solar Empire, all her life. But can she adapt and make friends when her teacher, Princess Celestia, sends her away to be the new science officer of the spaceship Ponyville on its voyage to explore the galaxy for much needed resources for the war against the Confederacy of Species?

Created by Prof Charles, the story can be found here