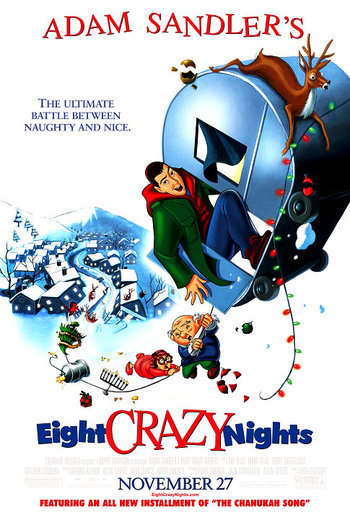 It's naughty. It's nice. It's animated.

Eight Crazy Nights is a heartwarming family animated musical from 2002 that will bring joy and laughter to people of all ages.

It's actually about a Jewish drunk in his early thirties named Davey Stone (voiced by Adam Sandler) who, after one too many run-ins with the law, is forced to clean up his act lest he spend the next decade in prison. Local youth sports volunteer and bully magnet Whitey Duvall (also voiced by Sandler) promises the small town of Dukesberry, New Hampshire that he can turn the delinquent into a model citizen before the last night of Hanukkah. Meanwhile, Davey tries to rekindle a relationship with his childhood crush, who's now a single mother, and her son.

It features rocket farts, snowman killing and an old lady getting her melons squeezed (not what it sounds like), and that's just the first five minutes!

The Nostalgia Critic parodies You're a Mean One, Mr. Grinch just to describe how unlikable Davey is.

The Nostalgia Critic parodies You're a Mean One, Mr. Grinch just to describe how unlikable Davey is.