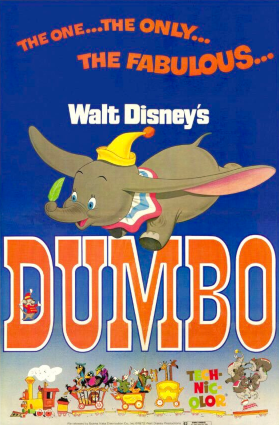 "I'll be done seen about everything, when I see an elephant fly..."
Advertisement:

Dumbo is a 1941 animated film, the fourth in the Disney Animated Canon. The previous year, Disney released two expensive animated features, Pinocchio and Fantasia, that both bombed at the box office. Production for the equally expensive Bambi was already well underway, and Disney had to quickly find a way to make some money in order to complete the movie. After a short children's book about a flying circus elephant was brought to his attention, Disney made Dumbo on a pretty cheap budget (it cost less than half as much as Pinocchio or Fantasia). Fortunately, it paid off and enough money was made to complete Bambi. Thanks to this and a re-release in 1949, Dumbo was the most profitable Disney film of the decade.

The movie opens with circus elephant Mrs. Jumbo receiving a new baby from the stork: a baby with incredibly large ears. This causes the other elephants and circus patrons to laugh at him, giving him the derogatory nickname of Dumbo. This enrages Mrs. Jumbo, who attempts to hide her son from the ridicule. But when children come to see the circus, they begin abusing Dumbo, and Mrs. Jumbo lashes out in fury and spanks one of the children. The ringmaster only sees her attacking the crowd and circus keepers, not realizing that Mrs. Jumbo had just been protecting her son. Because the ringmaster thinks Mrs. Jumbo just snapped, he separates her from Dumbo and has her locked up as a mad elephant. A mouse named Timothy stands up for Dumbo when the other circus elephants berate him, and subsequently tries to get Dumbo to become a big star. Unfortunately Dumbo messes up, tripping over his large ears, and he is cast as a clown instead, something which he does not enjoy at all. When Timothy and Dumbo accidentally become drunk, they wake up the next morning in a tree. A gang of crows living in the tree suggest that Dumbo must have flown with his ears. Using this information, the duo (with the crows' help) now plan to use this skill in order to make Dumbo a star.

A live-action children's show based on the movie, called Dumbo's Circus, aired on the Disney Channel in the 1980s at around the same time the similar show based on Winnie the Pooh did, where Dumbo could speak.

On a side note, a Direct to Video sequel was planned (and a preview of it can be seen on the 2001 60th Anniversary DVD, or just here

) but never got off the ground.

A live-action remake directed by Tim Burton was released in 2019.

Example of:
Elephants Are Scared of Mice