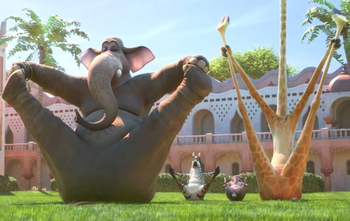 This is why they need the storks to deliver babies.
"If this film is so 'naturalistic' how come not a single fucking animal has any GENITALS?"
— Jacob Nion

Just because humans are uncomfortable with the subject of nudity, doesn't mean we're the only species to get our nudity censored in fiction — it is just as common for regular everyday animals to get this treatment as well.

This is usually a concession of realism for the sake of the artist, as most artists would prefer to avoid drawing an animal's genitals or anus themselves, taboo or no taboo. It can also be a product of stylization, to which animals are especially prone, and which tends to remove unappealing or unimportant features, oftentimes to make them cuter (for example, stylized dogs tend to lack claws and lips). Other times (by which we mean most of the time), whether or not Fido has gonads is way beside the point, so it's simpler to leave them out unless you mean to draw attention for a narrative purpose or a cheap gag. That's not a form of censorship; it's just Law of Conservation of Detail (just like how Nobody Poops).

This is technically Truth in Television for animals such as birds, reptiles, amphibians, bony fish, and invertebrates, whose genitalia are typically visible only as a small underside "vent" between the rear limbs (and easy to miss even without feathers or scales to obscure them). It isn't the case with male cartilaginous fishes, which have claspers to facilitate copulation in reality.

On the other hand, when depicting mammals (aside from monotremes — platypodes and echidnas), there's a common assumption that an animal's natural fur will adequately preserve the creature's modesty. However, observation of most real mammals will show that their fur is actually thinner in those places (so it doesn't get soiled when nature calls, and is easier to clean if it does). Also, many species' coats of fur are just too short to adequately conceal the features of their genital or anal area in the first place. Anyone who has seen a male pig, male cattle, or male dog (both desexed and intact ones), for example, will have no doubt noticed the prominent pair of features (testicles in intact ones, penises in both) between its rear legs (and on the belly in the case of dogs and cattle). However, fur mostly concealing the animal's genitalia is actually the case in some animals. As a rule of thumb, mammals that live further north will have thicker and longer fur and are more likely to justify this as the longer fur protects their naughty bits from the cold. There are also some animals that can actually retract their genitalia when not using them, such as the aforementioned echidnas.

The sole exception to this censorship in Western media is the four teats of the female cow (and also quite often the male cow), which are always present, thanks to the iconic image of the country milkmaid. The only time cow udders were ever censored was in the early 1930s, when Moral Guardians became offended by the showing of Clarabelle Cow's bare udders in the 1930 Disney short "The Shindig." Other female mammals, even goats, are almost never shown with explicit mammaries, even in scenes where her offspring are shown nursing from her. Japanese Media also tends to avert this with male tanuki, which are often depicted as having gigantic testicles as a symbol of luck.

For the purposes of defining examples, only animals who are mostly or "completely" normal in physical appearance (e.g. not visibly anthropomorphized) and animal mannerisms should be considered. For cases where a creature is sufficiently anthropomorphized that the Uncanny Valley effect might occur (such as with Funny Animals in a few cases and especially with Beast Folk), see Non-Humans Lack Attributes instead.

Note: When adding examples, limit aversions to instances in which the animals are drawn, rendered in CGI, or are otherwise not real. Many real life animals have visible genitalia, so listing aversions that involve actual animals would be unnecessary.

Sub-Trope of Anatomy Anomaly, and related to Barbie Doll Anatomy (the human version). Compare Funny Animal Anatomy. See also Appropriate Animal Attire for a broader discussion of modesty and clothing as it applies to animals. Contrast Non-Mammal Mammaries, when animals have breasts and/or nipples when they shouldn't have. The desire to avert this trope is why Animals Fear Neutering.