Film / Harry and the Hendersons 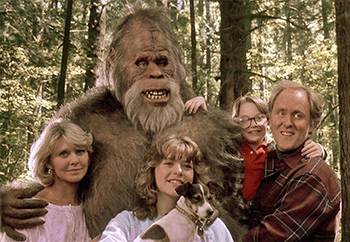 For as long as there have been stories, there have been legends. Many of these explain things now covered by science, while others cover the inexplicable for which science cannot account. Even as human knowledge expands, there always seem to be elusive creatures that tread the blurry line between legend and fact, which people swear are real but no one has been able to reliably study. These creatures are likely to remain in the shadows of human understanding.

At least they were, until George Henderson hit one with his car.

Realizing that he just made the find of the century on his way back from a family camping trip, George packs up what he believes to be the corpse of a Sasquatch and takes it home with visions of fame and fortune dancing in the minds of his family, but soon after makes a number of other discoveries: The creature was not dead, only stunned. And far from being the rampaging monster they first fear he is, he just appears to be quite gentle and curious, if confused about his current setting.

Now they have a new problem: Keeping him a secret.

Harry and the Hendersons (1987) is a family comedy film starring John Lithgow as George Henderson, against the rather phenomenal special effects by Rick Baker used to bring the friendly Bigfoot to life, for which the movie won an Oscar. It was followed by a 1991-1993 live-action series following the adventures of the Hendersons and their pet Bigfoot, billed as "ALF for the 90s".