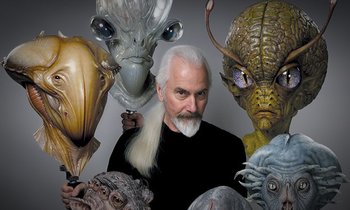 Richard A. "Rick" Baker (born December 8, 1950) is an American special make-up effects creator, make-up artist, and special effects supervisor mainly known for his creature effects. He was a master of the People in Rubber Suits effects. He especially often created realistic-looking gorilla suits - from King Kong (1976) to Gorillas in the Mist and Planet of the Apes (2001).

His work has earned him quite a pile of Academy Awards and a slightly larger, record-setting pile of nominations. In addition to his groundbreaking creature effects, Baker has also acted in several small roles within the projects he worked on. Unfortunately, he eventually decided to retire in 2015 at age 64 with the rise of CGI usurping his art and at the annoyance of too many filmmakers refusing to work within his standards of craftsmanship when they want cheap and quick work instead.