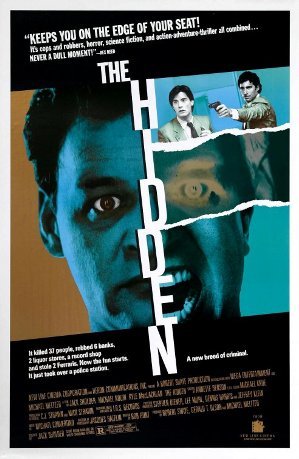 Tom Beck: Hey, why would he come in here and kill a guy for a lousy hundred bucks and a radio?
Lloyd Gallagher: Because he likes it. He sees something he wants, he steals it. If something gets in his way, he kills it. And right now, he's hiding out in your city.
Advertisement:

In Los Angeles, a spree killer is finally stopped by the LAPD, only for the dead killer's crime spree to be continued by seemingly unrelated people with no priors. When an FBI agent shows up with surprisingly detailed knowledge about the culprits, it soon becomes clear that the killer can not only switch bodies, it isn't even from Earth...

The film was a minor hit, and spawned a forgettable, critically lambasted

For the 2015 horror/thriller by the Duffer Brothers, see Hidden.