Character Name and the Noun Phrase 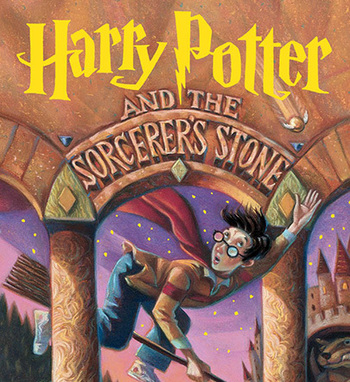 GREAT!
Now do the same title format six more times!note Seven, if you count the change from "Philosopher's Stone" to "Sorcerer's Stone".
"It will be called Harry Potter and... something. Catchy, don't you think? And I think I'll follow the same model for seven."
— J. K. Rowling (on the title of the sixth book before it was announced)
Advertisement:

This is a standard way to name individual works in a loosely-linked series; it is currently most common in children's books. Frequently the noun phrase in question will be of The X of Y form, and commonly this would be a Long Title, if you use a character's full name.

, written before the Harry Potter book came out.

While not to be confused with The Fantastic Trope of Wonderous Titles, there can be overlap. See also Name and Name, in which the noun phrase refers to one of the characters.