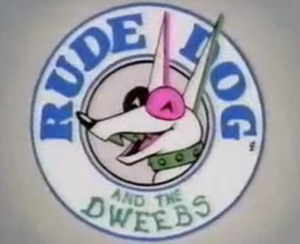 Rude Dog and the Dweebs is a 1980s Saturday Morning Cartoon on CBS about a group of misfit mutts and their misadventures, along with their self-proclaimed leader of the pack, a punky pooch by the name of Rude Dog.

Rude Dog initially was the mascot of a surf-themed line of merchandise developed by Sun Sportswear. The cartoon soon followed, featuring Rude Dog as the owner of a delivery company housed in an automotive garage. After rescuing a gang of gawky canines from the back of the dog catcher's van, he endearingly takes it upon himself to take them under his wing and teach them to be hip. This group, to whom Rude Dog referred as the Dweebs, consists of Barney, Kibble, Winston, Reggie, Tweek, Caboose and Satch. The show produced only 26 episodes.

It premiered on CBS on September 14, 1989 and had a run to December 7, 1989, replaced by the Dungeons & Dragons (1983) cartoon. Six months later, Rude Dog returned to CBS to run its course to September 6, 1990. It was faring well ratings-wise but was dropped because it was assumed that kids were mistaking Rude Dog for Budweiser beer's "party animal," Spuds McKenzie.