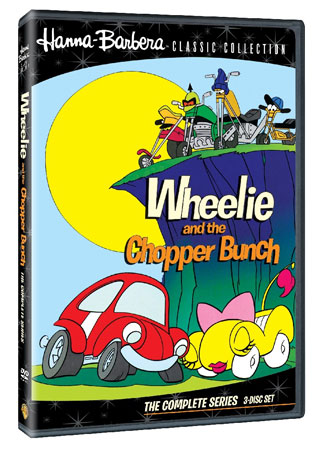 Wheelie and the Chopper Bunch was an animated series created by Hanna-Barbera in 1974.

The series followed the adventures of Wheelie, an anthropomorphic red car who made his living as a professional racing and stunt car, being the characters of the series were cars or any other kind of vehicle. He was also frequently antagonized by a four-member motorcycle gang known as the Chopper Bunch, which consisted of Chopper, who acted as the leader of the gang; Revs, a red motorcycle who often mixed up words in his sentences; Hi-Riser, the tallest member of the gang who was rather dimwitted, and Scrambles, the smallest member, who seemed to be the kid of the group. Wheelie did not talk, like the other characters could, instead honking in order to communicate, as well as displaying different symbols across his windshield (such as a heart for love, or a light bulb for an idea). Wheelie was also accompanied by his girlfriend, Rota Ree.

The series ran for one season on NBC before being cancelled in 1975.

The show provides examples of the following: