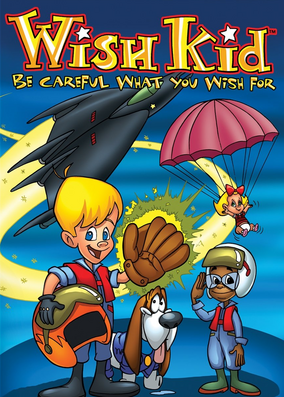 Wish Kid starring Macaulay Culkin (often referred to simply as Wish Kid) was an animated television series produced by DIC Entertainment that originally aired on NBC. The premise of the show was that Macaulay Culkin's character Nicholas "Nick" McClary owned a baseball glove that was hit by a small shooting star. When punched three times it allowed him wish for anything. However, the power was very limited as Nick could only wish for something once a week (a rather sly nod to its weekly Saturday airings). Also, the wishes would wear out after a certain amount of time, which would serve as the conflicts Nick gets into, forcing him to solve it.
Advertisement:

The whole series is available on DVD, so isn't hard to look for.