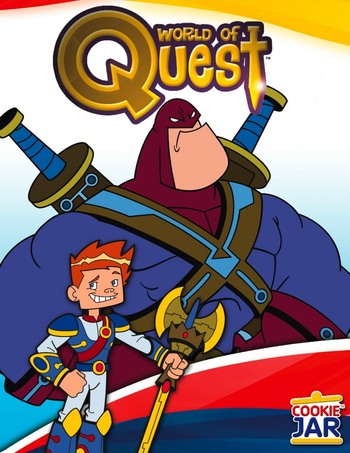 Nestor: "You may be in large, but I'm in charge!"
Quest: "Without me, kid, you wouldn't get too far..."
Nestor: My pal Quest does whatever I want.
Quest: Man, I gotta lose this little runt.
Nestor: I get to boss him around when we're in a mess!
Quest: This Prince Nestor is a royal pest.
—Nestor and Quest explaining the nature of their relationship in the series intro
Advertisement:

World of Quest is a Canadian-American animated fantasy series loosely adapted from the graphic novel of the same name by Jason T. Kruse and produced by Cookie Jar Entertainment for Teletoon and Kids' WB!. The show ran from 2008 to 2009 for 2 seasons and 26 episodes.

Set in the land of Odyssia, World of Quest focuses on the charismatic but vain and entitled Prince Nestor, the heir of the throne of the land. Unfortunately, his parents, the king and queen of Odyssia, have been captured by the villainous Lord Spite. In order to defeat Spite and free his parents, Nestor must find the legendary Shattersoul Sword. But since he's a very short and scrawny thirteen-year-old, his first move is to recruit the legendary warrior Quest, a surly, laconic, muscular man with a freakishly large chin whom his mother had banished years beforehand. By the unsubtle means of tricking Quest into reading an allegiance spell that forces him to do whatever Nestor commands him to, Quest is forced by the runty annoyance to serve as his bodyguard and accompany the prince on his mission to find the sword whether he likes it or not.

While Quest and Nestor don't exactly have the best relationship with each other (especially since Nestor's allegiance spell has no control over how Quest carries out his demands), the two must nonetheless work together if they are to find the five pieces of the Shattersoul Sword and defeat Lord Spite and his henchmen (including his Dragon General Ogun, the witch Deceit, and the beastly Katastrophe Brothers). Along the way, Quest and Nestor are accompanied by a variety of powerful fellow warriors, including the burly griffin Graer (an old friend of Quest and Nestor's original companion), the cyborg mercenary Gatling (a rival and former companion of Quest), the rookie sorceress Anna Maht (who also happens to be Quest's biggest fan), and Way, a magical shapeshifting entity who functions as a living map of Odyssia. Riding atop a gigantic tortoise-like Bastionite named Albert, Nestor, Quest, and their companions travel the land of Odyssia getting into one mind-blowingly weird scrape after another as they look for the five pieces of the Shattersoul Sword.