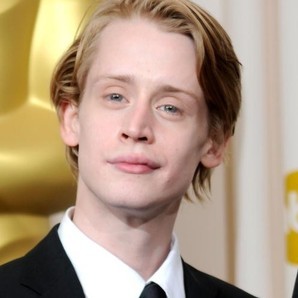 Macaulay Macaulay Culkin Culkin (born Macaulay Carson Culkin; August 26, 1980)note Yes, he did indeed change his legal middle name to a repeat of his first and last names. Thanks to a fan vote. The name change was completed in 2019.

is an American actor who enjoyed huge success as a child star in the 1980s and 1990s, starring in films such as Uncle Buck, Home Alone, Home Alone 2, My Girl, The Good Son, Richie Rich, Getting Even with Dad and The Pagemaster.

Fed up with his Stage Dad and his exhaustive schedule, Culkin quit acting at age 15 and has only made infrequent film and television appearances since (mostly low budget independent films). Now the quintessential Former Child Star, he devoted most of his energy in recent years to his comedy band Pizza Underground note A sort of Velvet Underground tribute act who use pizza-themed lyrics. He is also guilty of occasional Adam Westing.

In 2017, he started a comedy website meant to be a parody of many health and lifestyle blogs named Bunny Ears

, which is still going strong to this day. He is also an occasional RedLetterMedia collaborator.

He has two younger brothers who became actors, Kieran and Rory. He has a son with longtime girlfriend, Brenda Song, named after his late sister Dakota. Bonnie Bedelia is his aunt.