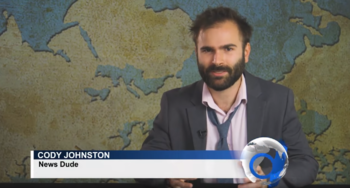 The News Dude at the News Desk
"Hello, I am a news dude and, news-wise, here is some of it."
-– Tagline of the channel
Advertisement:

In January of 2017 Donald Trump became the president. Of a country. And to combat the barrage of news, Cracked's Cody Johnston and Katy Stoll launched Some News. And all was well. But then, the great Cracked staff layoff of 2017 happened. And the news were no more.

But then, in 2018, Cody and Katy began producing Some More News, a web series on YouTube, legally distinct from the one mentioned above. And the News Dude came back. And all was well again. And fair. And balanced. ™©®

Some More News follows the News Dude, as he attempts to make it through the modern political landscape and offer some commentary on current events. The show mostly produces two kinds of episodes, ones that relate the most important or interesting stories in the recent past and offer some perspective and episodes that do deep dive analyses like "In what ways is the Trump administration similar to a fascist regime?".

The channel is here

, and the podcast Even More News can be listened to here

. The show's creators also run the political podcast 2020: Worst Year Ever with Robert Evans of Behind the Bastards.

NOTE: The show and its host are unashamedly on the left wing of the political spectrum, so please refrain from complaining or creator bashing.

Cody quotes Lee Atwater's description of the Southern Strategy, which includes several instances of the N-word. Instead of saying the N-word, Cody says "N-word".

Cody quotes Lee Atwater's description of the Southern Strategy, which includes several instances of the N-word. Instead of saying the N-word, Cody says "N-word".