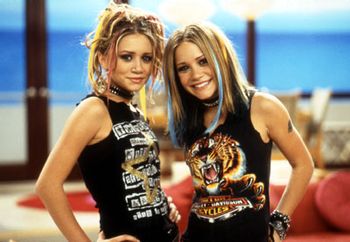 So Little Time was a short-lived sitcom starring Mary-Kate and Ashley Olsen. It ran from 2001-2002 on ABC Family, its first 3 months being on Fox Family. The show revolved around 2 twins, Riley and Chloe, whose parents have separated but still live very close to each other in Malibu. Their parents had been successful fashion designers before the split, but the father Jake had a midlife crisis and decided to leave for Malibu. They also lived with their snarky housekeeper Manuelo. Most of the show was about the girl's lives, school, boys, wacky situations, and the question of whether their parents would get back together.

Think Sister, Sister with Mary-Kate and Ashley instead of Tia and Tamara Mowry.