Podcast / Behind the Bastards 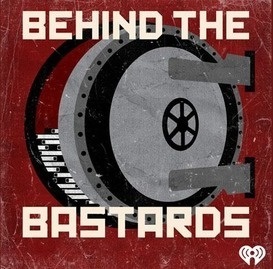 What's life-ruining, my tropers?
There's a reason the History Channel has produced hundreds of documentaries about Hitler but only a few about Dwight D. Eisenhower. Bad guys (and gals) are eternally fascinating.
Advertisement:

is an American comedy/historic podcast hosted by Robert Evans, a former war journalist and writer for Cracked (Not to be confused with the (now-deceased) producer of Rosemary's Baby and The Godfather).

In each episode, Evans, joined by a guest, narrates the backstory, rise to power, quirks and legacies of one of history's biggest bastards: People who, it can usually be said, left the world worse off than they found it. The guest will occasionally add their own tidbits of knowledge, but mostly adds comedy bits from their (usually horrified) reactions to what the bastard of the week managed to get away with, or by cracking jokes with Evans in the hope of keeping things light.

Alongside the well-known historical facts, Evans will often dive into the less-known and too-insane-to-be-made-up personal details of the bastards, such as Saddam Hussein's attempts at writing romance novels or how an optometrist became the dictator of modern-day Syria. Evans' producer Sophie will, on occasion, cut in to drag the subjects back on track whenever digressions get too meandering.

Episodes are usually released weekly, with longer episodes split into two-parters released a day apart. See also Evans' other work It Could Happen Here, his novel After the Revolution and Worst Year Ever, a political podcast made by Evans in collaboration with Cody Johnston and Katy Stoll from Some More News.

You know what won't ruin your life? The following tropes and services: