Literature / The Protocols of the Elders of Zion 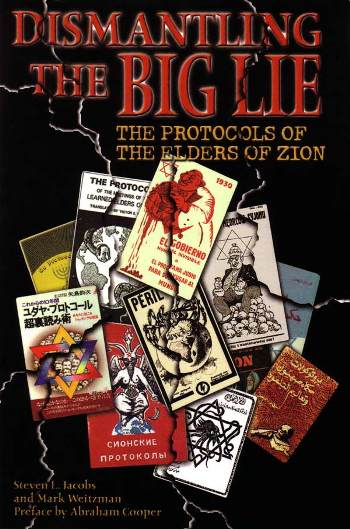 Dismantling the Big Lie, a study of The Protocols whose cover shows several editions of the notorious book.
Advertisement:

The Protocols of the Elders of Zion is the Bible for antisemites around the world. Allegedly, it describes a Jewish cabal's Evil Plan to Take Over the World in their own words — in short, the Trope Codifier for many an elaborate conspiracy theory today.

In the 19th-early 20th century, sinister racist and antisemitic trends were on the rise, and many European countries have ideologically contributed to what would later become the greatest genocide of the 20th century. France contributed Arthur de Gobineau who was the pioneer of scientific racism. Britain contributed Houston Stewart Chamberlain who became "Hitler's John the Baptist" and was in his time praised by many intellectuals. And this book is Russia's contribution to the nightmare.

First published in 1903, during the twilight years of Tsarist Russia, when antisemitism was at its height (pogroms and all that) and the House of Romanov looked like it was in trouble (it was), The Protocols are widely believed to be authored by the Okhrana,

journalist and Paris agent, on orders from then chief Pyotr Rachkovsky.

The intended message boils down to, "All the problems in Russia are caused by the Jews, so don't blame the Tsar. Also, the Jews want you to overthrow the Tsar, so don't do that. In fact, the Tsar is the best thing to have happened to Russia since unification!" — granted, the Tsar was only mentioned sparingly and offhandedly, but the point still stands.

an Irish reporter and Constantinople correspondent for The Times, asserted The Protocols to be a forgery, finding that much of it bore a distinct resemblance to The Dialogue in Hell Between Machiavelli and Montesquieu,

an 1864 satire against Napoleon III, written by French lawyer and Bourbon royalist Maurice Joly, which nicely explains why The Protocols read as though they were meant for dissemination in 19th-century France. But if you think this stopped people from believing in The Protocols, then, boy, are you very naïve.

The fall of the Romanovs and subsequent rise of the Soviets saw a mass exodus of White (anti-communist) Russians, many of whom brought copies of The Protocols with them, using them as tools of propaganda against the communist regime, believing it to be concocted by Jews (conveniently reinforced by the fact that both Leon Trotsky and his ideological forebear Karl Marx were of Jewish stock).

In 1920, Henry Ford brought The Protocols to the United States, where he published some 500,000 copies. You probably know Henry Ford as "that car guy", but there was another side to him. When a reporter pointed out to him that The Protocols had been exposed as fake, Ford replied, "The only statement I care to make about The Protocols is that they fit in with what is going on. They are sixteen years old, and they have fit the world situation up to this time. They fit it now." Across the Atlantic, Ford's view was shared by Adolf Hitler, who would directly cite them in his autobiography, Mein Kampf. It's been said that The Protocols were Hitler's "warrant for genocide". Eventually Ford declared he'd made a colossal mistake in publishing The Protocols and later printed articles attacking it in The Dearborn Independent (the newspaper he owned).

In the West today, The Protocols continue to be circulated among neo-Nazi groups. They also inspired The Turner Diaries, Hunter and other white nationalist works by William Luther Pierce, the founder and leader of the National Alliance. However, the book's biggest contemporary success has been in the Middle East. The Protocols were believed authentic by Muammar Gaddafi and Osama bin Laden. In 2002, Egyptian television aired Knight Without a Horse, a Mini Series based on The Protocols. Saudi Arabian textbooks describe The Protocols as a genuine historical document. And this is just scratching the surface.

In 1993, a Russian court officially declared The Protocols to be an antisemitic forgery. But if you think this stopped people from believing in them, then you really haven't been paying attention.

Zuckermann: Don't you know the headlines this picture [of an Octopus encircling the globe] will make? "The Jews have murdered a giant octopus in outer space!"
Goldberg: Zuckermann, we're planning to Take Over the World! Don't you think it would make a worse headline?