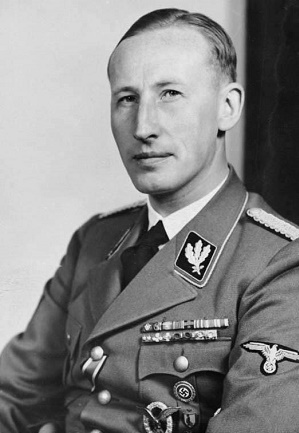 Reinhard Tristan Eugen Heydrich (March 7, 1904 - June 4, 1942) was one of the key figures of Nazi Germany. Most infamously, he was one of the main architects of The Holocaust. Many historians regard him as the darkest figure within the Nazi elite, the one most closely resembling the Nazi Aryan ideal of being tall, blonde haired, blue eyed, athletic, intelligent, power hungry, and utterly ruthless and merciless. Adolf Hitler described him as "the Man with the Iron Heart", while his enemies and victims referred to him as "The Hangman", "The Butcher of Prague" and "The Blonde Beast", among other self-explanatory monikers.

Heydrich was in his youth known to be athletic, and especially enjoyed swimming and fencing, as well as ballroom dancing and the violin. He was also notably shy, and was held in at least some degree of contempt by his peers, who where known to mock him behind his back for his lanky build, his slight tendency towards being cross-eyed, and, not least, his notably high-pitched voice and rather unusual laugh which was described as sounding like "braying", which earned him the not very flattering nickname "Die Ziege" (the Goat). Heydrich was so ashamed of these traits that he for his entire life refused to hold public speeches, fearing that his voice would reduce him to a laughingstock. His youth was also marked by recurring rumors that suggested that he had some Jewish ancestry, something that resulted in yet another rather unflattering nickname: "Moses Handel".

After being dismissed from the German Navy,note He was charged with "conduct unbecoming to an officer and gentleman" for breaking an engagement with a woman he had known for six months before. he joined the Nazi party in 1931 (his wife Lina, née von Osten, was already a member and encouraged him) and became the head of the Sicherheitsdienst (SD, Security Service), the intelligence gathering service of the SS within the party, which became a State Sec once Nazis took power in January 1933. He went on to head the Reichssicherheitshauptamt (RSHA, Reich Main Security Office), which merged the SD with the Sicherheitspolizei (SiPo, Security Police) and was deemed to solve the problem of the "enemies of the Reich". To reach that goal, Heydrich supervised the creation and actions of the Einsatzgruppen ("deployment groups") death squads in Eastern Europe, which ended up massacring over 1 million people in the wake of the Wehrmacht on the Eastern front during World War II, the majority of them being Jews.

He projected the next step in industrialized murder — the deportation and gassing of millions in specifically designed camps in Poland — and presented it to his peers at the Wannsee Conference on 20 January 1942. He was also a major in the Luftwaffe, flying nearly 100 combat missions until 22 July 1941, when his plane was hit by Soviet anti-aircraft fire. Heydrich made an emergency landing behind enemy lines, evaded a Soviet patrol and contacted a forward German patrol. After this, Hitler personally ordered Heydrich to return to Berlin to resume his SS duties. He became acting Reichsprotektor of the Protectorate of Bohemia-Moravia (basically the governor of the de facto occupation of what is today The Czech Republic) in September 1941. Upon his arrival in Prague, Heydrich sought to eliminate opposition by suppressing Czech cultural elites and deporting and executing members of the Czech resistance, while making sure the local population remained productive for the German war effort.

He became probably the most famous target of assassination during World War II (next to Adolf Hitler naturally, although all of the attempts on the latter were unsuccessful). Two Czechoslovak soldiers in exile, Jozef Gabčík and Jan Kubiš, were trained in Great Britain and targeted Heydrich in Prague with the help of local resistance operatives on 27 May 1942, in an operation known as Anthropoid, which aimed at "shaking up" the Czech resistance against Nazi Germany. Heydrich didn't directly die in the attack,note Gabčík's Sten submachine gun jammed at the worst moment and Kubiš threw a grenade at Heydrich's staff car; Heydrich was caught in the blast and both assassins fled after a brief firefight with Heydrich and his driver but succumbed to an infection of his wounds and died in hospital on 4 June 1942.note  Despite his personal fury at Heydrich for carelessly travelling in an open-topped car, making him an easier target, for propaganda purposes, Hitler had Heydrich given a state funeral. The commando squad was hunted down and all of its members ended up dead,note After one of their own betrayed them for amnesty as well as the bounty being offered, the commandos responsible for the attack on Heydrich retreated into the crypts of the Ss. Cyril and Methodius Cathedral in Prague, where they were either killed or committed suicide when the Nazis stormed the church and a horrific wave of reprisals claimed the lives of at least 5,000 people,note Hitler initially wanted to execute 10,000 Czechs at random in retaliation, and was only persuaded not to when his advisers insisted such a swathe of executions would be too detrimental to Czechoslavkia's ability to supply the German war effort. including the population of the villages of Lidice and Ležáky, which were razed to the ground.note This was actually the intended outcome, designed to horrify the Czech populace into opposing Nazi rule; many of the local resistance members who helped the assassins had no idea of their actual mission and were actually aghast when they learnt their intent to kill Heydrich, as they knew full well the type of vengeance the Nazis would seek.

Popular culture tends to consider him as the poster boy "Aryan" as envisioned by Nazi ideals, due to him being blond, tall and blue-eyed (one of the only Nazi leaders to combine all these traits, actually), in addition to being cultured (he was a fencer on the Olympic level and a skilled musician) and ruthless. He is also a frequent character in Alternate History fiction works, in which he often outlives his real life counterpart due to Godwin's Law of Time Travel or an extensive Day of the Jackboot, if not outright supernatural reasons.