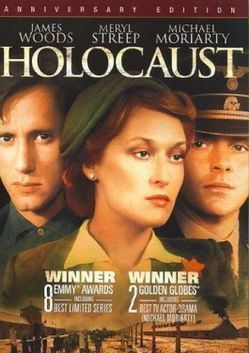 A miniseries made in 1978. It tells the story of two families. One is the Weiss family, German Jews consisting of patriarch Josef Weiss, his wife Bertha, and three children (Anna, Rudi, and Karl) as well as Karl's gentile wife Inga. The other family is the Dorf family, consisting of Erik, Marta, Peter, and Laura. Erik Dorf joins the SS due to economic problems, and goaded on by his ambitious wife Marta, rises through the ranks to help plan out The Holocaust. It takes place over a span of 10 years, from 1935 to 1945.