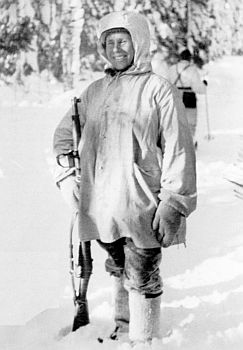 The White Death
Throughout this campaign, Häyhä basically just ran around doling out head-shots like the ice cream man gives out Dove bars on a hot sunny day in the Sahara desert. His personal best was fucking twenty-five kills in a single day. That's like an entire baseball team!
—Badass of the Week, on the man himself

He was born in 1905, and prior to the Winter War of Finland, was an ordinary farmer who had served one compulsory year in the Finnish army. When the war began in 1939, he was called to action, and, taking his trusty Mosin-Nagant rifle, became to many an almost legendary figure over the next 105 days.

Using his extensive knowledge of the surrounding forest as well as a knack for camouflage (he dressed in all white and even kept snow in his mouth so as to mask his breathing and avoid giving away his position), he racked up at least 500 kills-estimate (259 by rifle, and an equal number by submachine gun). While his Russian counterparts would spend a few days at a time in the field, he just stayed out there, taking food, ammo, and whatever else he needed from the bodies of Russians he killed. All the more impressive was that he did all of this without a scope or a spotter. He instead used the trusty iron-sights on the rifle, as he noticed that using a scope presented a target due to the glint off the lens; when asked later in life how he had become such an incredible shot, Simo answered simply: "Practice. And clear days."note In forested terrain, where battles are fought at shorter ranges, a trained marksman can easily hit a target as large as a man without a scope. Extreme-long-range hits like those that happen in modern Afghan or Iraqi Wars are a different story.

The Russian forces were absolutely terrified of Häyhä, nicknaming him The White Death. They attempted numerous times to kill him, from sending teams of countersnipers after him (none came back alive) to artillery bombing any place they thought he was hiding. Each of these attempts was met with failure, and Simo continued to stomp any enemy who came within his sights. Eventually, the Russians had a stroke of luck when one sniper managed to shoot him through the jaw with an explosive round, blowing half of his cheek away. Incredibly, Simo survived. A ceasefire was ordered, and eleven days later, on the day Simo awoke, the Russian army withdrew. While almost certainly a coincidence, it was nonetheless an incredible one. With the Winter War over, Simo returned to farming, where he spent the majority of his life breeding dogs and hunting moose, sometimes being the hunting guide of the President of Finland. When asked if he regretted killing so many people, all Simo had to say was: "I did what I was told to as well as I could". He passed away in 2002, aged 96.

Many people consider him to be one of the ultimate examples of a badass in real life, having racked up more confirmed kills than any other sniper in history. Despite this, he remained a very humble man who only considered his actions to have been doing duty by his country.