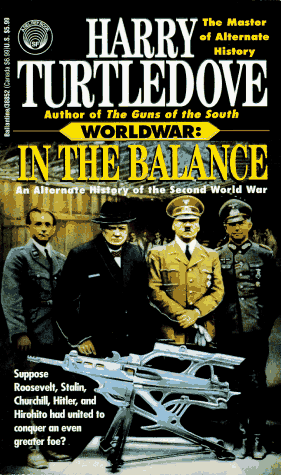 Worldwar is an Alternate History continuity by Harry Turtledove about an Alien Invasion during World War II.

The Race are a proud species of reptilian aliens with tens of thousands of years of culture, bringing an invasion fleet to the primitive world of Tosev 3 (locally called Earth) to bring it into the Empire and the light of civilization. They expect a fairly easy conquest given the locals' lack of sophistication. Their probe mission, just eight hundred local years ago—certainly nowhere near enough time to advance technologically at all—found sword-swinging savages riding on animals. Then, to their discomfort, they discover that the planet is emitting radio transmissions. Arriving late in the local year 1941, they find the primitive industrial civilization of the Tosevites confusing, implausible, and an affront to the Race's rigid doctrines. Worse, if the Tosevites have advanced that much, it throws the certainty of the conquest in doubt. However, Fleetlord Atvar decides he could go down in history as one of three leaders to conquer an alien world, or the first to turn tail and flee without even having tasted combat. They go ahead with the conquest exactly as planned.

This is a mistake.

They land squarely in the middle of World War II, to the absolute confusion of everyone involved. Through the eyes of Loads and Loads of Characters, of all nationalities, human and alien, we read about the humans desperately trying to survive, and the aliens desperately trying to win. The Race is forced to become more like humans, making hasty decisions and breaking protocol. It also turns out that ginger (the spice) is a powerful and highly addictive narcotic for the Race, which further strains their normal way of life. This takes up the four books of the Balance series (the original Worldwar series) and ends with a stalemate and truce between the Race and the human governments that managed to resist their invasion (the USA, the Greater German Reich, the Soviet Union, the United Kingdom and Imperial Japan.)

Next comes Colonization, a trilogy that picks up twenty years after the end of Worldwar. The Race's colonization fleet arrives on Earth expecting a subdued planet, only to find that barely half the planet's surface is under the (often contested) rule of the Race. This creates intense friction between the troops of the invasion fleet, who have been significantly changed by their interaction with humans, and the much more conservative and strait-laced colonists. Even more tension comes from the just-short-of-shots-fired relationships between the surviving human powers: They are united in opposition towards the Race, threatening nuclear war in defense of an almost-enemy if the Race makes any aggressive moves, but all of the major human states are hostile towards each other as well, and aren't averse to sabotage and false flag actions aimed at rival humans. Making matters worse for the Race, it is discovered that on top of its narcotic effects to the Race, ginger causes females to go into estrus out of season, something undiscovered by the all-male conquest fleet. This has devastating effects on the Race's mating cycles, and introduces them to some totally alien concepts like sex for pleasure, prostitution, and monogamy.

Finally, a standalone book, Homeward Bound, was added to the series. A whole bunch of humans get on a human-made starship and head towards the Race's homeworld, in an effort to negotiate a lasting peace between humans and the Race. The Race, for its part, is still contemplating the possibility of utterly destroying Earth to end the threat to the Empire, even though it would mean killing hundreds of millions of their own colonists. But in the end, they discover that it's already far too late to contain the humans, and they need to begin adapting to compete, especially since more Humans show up at Home in a second starship, this one having artificial gravity and a Faster-Than-Light stardrive.