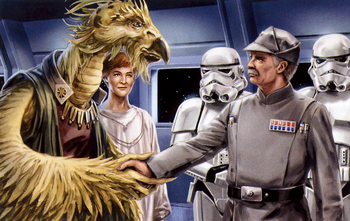 The Chief of State of the New Republic and the Supreme Commander of the Imperial fleet call off the war.
"When neither side is superior, isn’t talking better than fighting?"
— Moishe Russie, Worldwar: Striking the Balance
Advertisement:

Wars don't all have to end in a grand Final Battle. In fact, if the combatants both Know When to Fold 'Em, they can end the war without either side being crippled or annihilated.

Basically, two deadly enemies have a sit-down discussion, usually in neutral territory. The talks may be of vital importance: if they fail, a war on hold may restart or a new one may begin.

Since not everyone is interested in peace, someone will probably try to sabotage the talks — usually with a False Flag Operation. If the Propaganda Machine that told a side that the others are so evil was really good, The Remnant may refuse to accept the leader's negotiations and continue the fight all the same (and get rid of the "traitor" leader, if possible). Sometimes the more evil side just wants access to the other side's leadership, but typically peace talks are a good sign that neither side is entirely evil, and both are in fact fairly reasonable.

Of course, sometimes the peace conference is a trap, and the villains have no intention of negotiating in good faith; merely in luring the opposition into a place where it can be stomped out for good.

If the conflict lasts long enough, a third, neutral party may be required to Reconcile the Bitter Foes. Manipulative characters may take this chance to pull a Genghis Gambit, causing both sides to put off their differences in the face of some new threat. Hardliners may conspire to sabotage the conference as a Pretext for War.