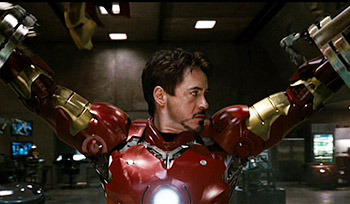 Oooh, baby, you know just how to put me together...
"We'll use my new duel-disk system, because I have a hard-on for technology."
— Kaiba, Yu-Gi-Oh! The Abridged Series.
Advertisement:

A sequence, scene, or overt emphasis on the design and/or workings of machines, gadgets, and vehicles, with the intent of showing admiration and possibly invoking audience lust for the items in question. Often features smooth pans across ultra-glossy exteriors, a sequence of parts moving in intricate and complex patterns, lingering close-ups of key components, or highly detailed descriptions and diagrams of how a device is put together.

For tech geeks in the audience, this can be real Fanservice... even if it's not realistic but sufficiently cool.