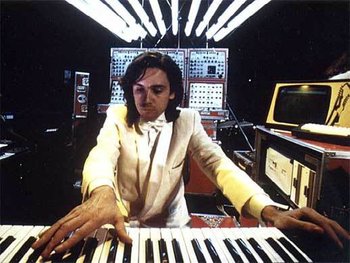 Jean-Michel Jarre, October 1981, live in China. Yes, he gigged with a Fairlight.
"Music is the human treatment of sounds."
Advertisement:

Jean-Michel André Jarre is a French electronic musician and multimedia performer, recognized as one of the most important pioneers in modern electronic music. He was born in Lyon on August 24, 1948 as the son of film score composer Maurice Jarre and France Pejot, a former Resistance member during World War II.

His musical career began in the late 1960s with two bands, one of which covered the Shadows and the Spotnicks with Jarre as as Strat-toting Hank Marvin stand-in and appeared in a nowadays obscure French movie. His first release was the single La Cage in 1971 which is so rare that it has grown more expensive than many synthesizers. It was followed by the not less rare album Deserted Palace (1972) and the movie soundtrack Les Granges Brûlées (1973). Over the 70s, Jarre did a couple of jobs in the music industry including TV and advertising music and composing the music and/or writing the lyrics (!) of French chansons/pop songs, partly in the wake of the disco era.

These jobs seem to have paid him enough to gather together a small home studio that he installed in one of his two kitchens—in a time when there were practically no home studios at all as opposed to today, and when all equipment including the synthesizers was hardware—and record his 1976 breakthrough album, Oxygène. This album, together with its 1978 successor Équinoxe, defined Jarre's Signature Style of electronic music that sounded nothing like it had been made with machines (as opposed to Kraftwerk, for example). The major labels saw no chance in instrumental electronic music being commercially successful, though, so Jarre released Oxygène through Les Disques Motors, a small jazz label, where it reached gold status within no time, putting Jarre on the map and leading Les Disques Motors to shift him over in 1978 to Disques Dreyfus, a newly-created splinter label for artists with potential for international success, on which he would remain until moving over to Warner Music in 2003. Since Jarre's music didn't fit into any established musical genre, the hit single "Oxygène 4" managed to top the U.S. pop, jazz, classical music, and country charts all at once; not bad for a French musician.

The people who bought Oxygène and Équinoxe have never gotten over Jarre leaving his Signature Style in The '80s, moving on with the development of electronic instruments, and trying new styles. Zoolook (1984, featuring Laurie Anderson, Marcus Miller, and Adrian Belew, just to name a few guest musicians) was heavily based on vocal samples from dozens of languages, Revolutions (1988) had more Roland D-50 written over it than anything ever made by Enya, Waiting For Cousteau (1990) was Jarre meets steel drums.

The 1993 album Chronologie saw Jarre on his way back to the roots with the dance styles of The '90s combined with some analog synths and sounds used by Jarre in his more popular albums from The '70s; besides, it was Jarre's first album with all tracks given the album title and the track number as titles since Magnetic Fields (1981). Oxygène 7-13, released in 1997 (intended to be a 20-years-on-Oxygène anniversary album but delayed by several months) was thoroughly analog and an almost complete return to Jarre's Signature Style, weren't it for some more contemporary dance beats in some parts.

Metamorphoses (2000) was Jarre's first and only album with the majority of tracks having vocals and lyrics and being sung for a change, only two out of twelve tracks are Instrumentals. Once again, though, it didn't sound like anything Jarre had made before. Sessions 2000 (2002) was made of recorded electronic jazz-like jam sessions which Jarre put on a CD because he had to fulfill his album quota before he could get out of his record deal. His subsequent original releases (Geometry Of Love, 2003, Téo & Téa, 2007) turned out so weird that Jarre hardly ever played anything out of them at his concerts. Instead, he revived older material twice (he had to because his old recordings remained property of the jazz label). In 2004, Aero was released, a sort of Greatest Hits Album with three new tracks and the rest having been partly re-recorded and remixed in surround sound, and in 2007, Jarre and three of his co-musicians remade all of Oxygène live in one sitting, enabling the whole album to be performed live on stage.

Jarre probably keeps a negative record sales record with his 1983 album Music for Supermarkets, of which only one was produced and then sold at an auction. Jarre famously broadcast the entire album over the radio, encouraging listeners to pirate the broadcast, and publicly destroyed the master tapes and master plates, thus ensuring that the one LP copy of Music for Supermarkets was the only one in existence. However, Jarre did keep the multitrack recordings, and reused snippets of them in his later work.

A description of Jean-Michel Jarre wouldn't be complete without mentioning his concerts. Jarre took both lightshows and audience sizes Up to Eleven. His 1979 premiere concert with only him and some electronic instruments on a stage on the Place de la Concorde in Paris already gave him an entry in the Guinness Book of Records for the largest concert audience ever—one million. What they saw wasn't just a synth nerd in a keyboard castle but a show of lights and projections of previously unseen dimensions. In 1981, the British Embassy in the People's Republic of China got him to play five indoor concerts in Beijing and Shanghai as the first pop musician ever. Jarre's next live show in Houston, Texas, in 1986 was blown out of any proportions imaginable when he used just about all of downtown Houston's skyline as the backdrop (as in he had lights, laser projections, still images, and even movies shot onto the facades of several-100-feet-tall skyscrapers with skytrackers on their roofs and gigantic fireworks even above these) for a concert with which he beat his own record (more than 1.5 million spectators). He played a similar outdoor concert for Pope John Paul II in his hometown Lyons half a year later, he gave a show on a stage floating on the River Thames inmidst the ruins of the Queen Victoria Docks in London in 1988 during a phase of downright extremely bad weather, and he improved his own record a second time on a pyramid-shaped stage in front of Paris' brand-spanking-new skyscraper quarter La Défense in 1990 (for some 2.5 million people).

It took him until 1993 to actually tour for the first time, and even then, he only played a couple of shows throughout Europe because each of the huge custom-made open-air stages took several days to weld together. And it wasn't before 1997—two years after his third big show in Paris, this time under the Eiffel Tower—that he had a tour concept that fit onto existing stages in locations with a solid roof. Jarre's last giant show in a city was part of Moscow's 850th anniversary, played in front of the State University (the biggest building in all of Moscow, and the architecture of the Stalin era was impressively huge) and watched by at least 3.5 million people as the university can be seen all over the city. The millennium celebrations led him to the pyramids of Gizeh which of course were used as projection screens again. The 21st century saw him play a number of smaller single shows in places such as the Akropolis in Athens, a Danish windmill park, Tiananmen Square in Beijing, a legendary shipyard in Gdańsk, and the Moroccan desert; on the other hand, he played one tour per year from 2008 to 2011 where he kept shamelessly showcasing unbelievable amounts of mostly highly valuable vintage synthesizers.

In 2015, he started a project called Electronica in which he collaborated with a lot of big names in music, not only electronic music, such as Pete Townshend, Armin Van Buuren, Lang Lang, John Carpenter, Hans Zimmer, Tangerine Dream (their very last production with Edgar Froese), Air, Little Boots (herself a big Jarre fan), 3D, Moby, Vince Clarke, Gary Numan, Pet Shop Boys or Cyndi Lauper. "Exit" even includes a monologue by Edward Snowden.