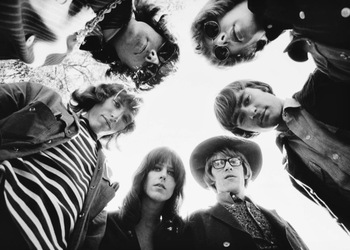 Jefferson Airplane was an American rock band from San Francisco, originally active from 1965 to 1972.

According to Jorma Kaukonen, the name came from a friend of his, Steve Talbot, who jokingly nicknamed him "Blind Thomas Jefferson Airplane" as a parody of the sort of nicknames Blues singers usually adopted (possibly with Blind Lemon Jefferson in mind). When no one else could think of a band name, Kaukonen remembered Talbot's joke and shortened it appropriately. This didn't stop rumours that the original name referred to an impromptu method of holding a too-short marijuana joint.

Jefferson Airplane started out as a Folk Rock band with a sound similar to The Byrds and The Lovin' Spoonful. The original lineup consisted of Marty Balin and Signe Anderson on lead vocals, Jorma Kaukonen and Paul Kantner on guitar, Bob Harvey on bass, and Jerry Peloquin on drums, although Harvey and Peloquin didn't last long and were quickly replaced by Jack Casady and Alexander "Skip" Spence on bass and drums respectively. Airplane would release one album (Jefferson Airplane Takes Off, 1966) with that lineup before Spence moved on to form Moby Grape (and subsequently suffered from mental illness, dying in 1999), and Anderson left to raise a family.

They were replaced by Spencer Dryden (the nephew of Charlie Chaplin) and iconic front-woman Grace Slick, the latter having just left another group called the Great Society that had opened for Airplane at some gigs. Now the classic lineup was set, and with the release of their 1967 album, Surrealistic Pillow, Jefferson Airplane established themselves as leading proponents of a hard-and-heavy offshoot of the Psychedelic Rock genre known as "acid rock". They enjoyed Top 10 hit singles in America with "Somebody to Love" and "White Rabbit", became the only band to play at all three of the most famous rock festivals of The '60s (Monterey, Woodstock, and Altamont), and headlined the inaugural Isle of Wight Festival. Unfortunately, the group seemed to run out of steam with the onset of The '70s; Dryden was fired in early 1970 (Replaced first by Joey Covington, then by former drummer of The Turtles, John Barbata), and Balin, disillusioned with the psychedelic scene after the death of his close friend Janis Joplin, and with the gradual decline of his influence and involvement, quit his band. After a series of revolving members (Including violinist Papa John Creach and vocalist David Freiberg), they finally called it a day in 1972. Kaukonen and Casady went on to further success with Hot Tuna, and the remaining members went on to form Jefferson Starship.

The classic lineup of Jefferson Airplane (save for Dryden, who was excluded as Kantner still held a grudge against him for his role in firing one of their managers in 1968) reunited for one last album in 1989. The album was not very well-received, but the tour supporting it was a big success. By then at the age of 50, Slick chose to retire from the music industry, saying that 'All rock-and-rollers over the age of 50 look stupid and should retire'. Papa John Creach died from heart failure in 1994, and the Airplane reunited once more in 1996 for the induction to the Rock and Roll Hall of Fame. This time Dryden participated and Slick was absent. Skip Spence died from lung cancer in 1999, Spencer Dryden died in 2005 from colon cancer, and Joey Covington died in a tragic car accident in 2013. In 2016, Paul Kantner died from multiple organ failure and septic shock following a heart attack, and Signe Anderson died from COPD on the same day as Kantner. Marty Balin passed in 2018.