Music / Blows Against the Empire 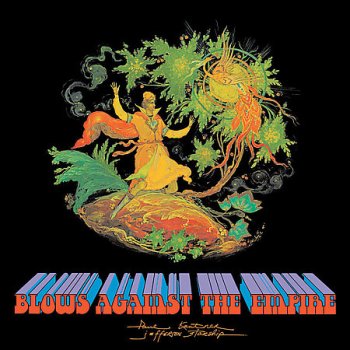 Blows Against The Empire is the debut studio album by Paul Kantner, released in 1970. A sci-fi concept album, it was released as his band Jefferson Airplane began its downward spiral. The album was described as being by "Paul Kantner and Jefferson Starship", but this was before the official formation of the band known as Jefferson Starship, and the album featured various friends of Kantner's, including Jerry Garcia of The Grateful Dead, David Crosby of The Byrds, Graham Nash of The Hollies, and, of course, several former members of Jefferson Airplane, including Grace Slick who wrote or co-wrote several of the songs on the album.

The album was very loosely based on the novel Methuselah's Children by Robert A. Heinlein. It tells the story of a rag-tag band of hippies, free-thinkers, and radicals who, frustrated with an increasingly oppressive America, decide to hijack the first-ever starship, which is just being completed, and set off to create their own utopia in the sky. The protagonist, a musician and rebel, whose wife is pregnant with her first child, decides to join the hijackers rather than raise his child in an increasingly dystopian world.

It was nominated for a Hugo Award for Best Dramatic Presentation, a category normally used for movies. Probably due to the influence of the controversial New Wave Science Fiction movement, it came in second to "No Award", beating every other entry, but still not receiving the award.

Tropes against the empire: