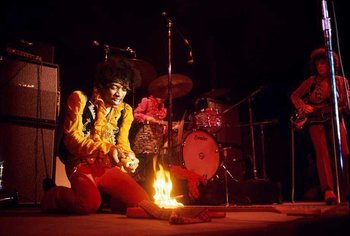 Monterey Pop is a 1968 Concert Film directed by D. A. Pennebaker. It is a documentary of the famous Monterey International Pop Festival, which was held June 16–18, 1967 in Monterey, California.

A staggering amount of talent appears in the film including Janis Joplin, Jefferson Airplane, The Animals, Ravi Shankar, Jimi Hendrix, The Who, Otis Redding (who died in an airplane crash six months after the festival and before the film was released), and Simon & Garfunkel. The Mamas & the Papas, whose leader John Phillips helped to organize the festival, appear twice.note Performers at the festival who do not appear in the film include the Steve Miller Band, The Byrds, Laura Nyro, Buffalo Springfield (minus Neil Young, who was estranged from the band at the time), and The Grateful Dead.

Pennebaker employs the fly-on-the-wall documentary style that he used for such previous films as Don't Look Back, so the film lacks many typical documentary trappings like The Ken Burns Effect. Veteran documentarians such as Richard Leacock and Albert Maysles (Grey Gardens) served as cameramen.