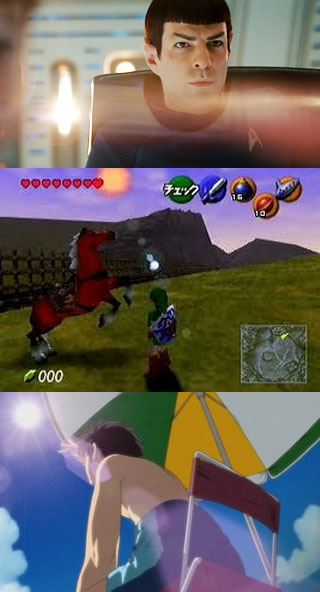 Top to bottom: Star Trek (2009), The Legend of Zelda: Ocarina of Time, and Full Metal Panic? Fumoffu.
"Nothing can quite prepare you for that first sight of Picard converted into a Borg drone – it isn’t the zombie white make up or the technological attachments that shock me; it is whoever thought of the laser eye which reaches straight out to the viewer as he turns towards the camera. Absolute genius."
— Doc Oho

on Star Trek: The Next Generation, "The Best of Both Worlds Part I"
Advertisement:

A form of glare, which has become a trope in its own right.

It occurs when a bright object, usually the sun, is in the shot. The light causes a glare off every piece of glass it passes through on the way to the film or optical receiver. This causes a little ghostly chain of circles, on an imaginary line from the object through the center of the frame.

Notably, this camera glitch is included where it doesn't have to be, for dramatic effect, or to make something look like it was shot with a real camera (See The Coconut Effect).

In 3D CGI, the rendering engine can throw one in automatically. (See: the Star Trek (2009) opening sequences, Adobe Photoshop's "Lens Flare" plug-in.) Often, the software will even allow the user to specify the type of lens to be faked.

The stylistic use of anamorphic flare (the horizontal, typically blue line) in films largely began in the 1980s, spearheaded by the work of action-movie cinematographers (particularly Jan de Bont) on films such as Die Hard and Lethal Weapon. Michael Bay made it a trademark, and J. J. Abrams turned it into a meme.

3D video games in the mid-to-late 1990s were absolutely polluted with fake-looking lens flare effects. The PlayStation port of Quake II added a little star-shaped glare effect and a lens flare around every light source on the map. Walking down a corridor with spotlights was a ridiculous experience. Games journalists therefore refer to any bandwagon visual effect as "the new lens flare".

In older anime, a fake lens flare combined with a sharp sound effect (shaheen!) is used during a beauty shot of any appropriately shiny Humongous Mecha, as parodied several times on Dexter's Laboratory.

Artists have many debates over the use of lens flares in animation and CGI. Ironically, the artificial element can add a touch of realism (even without The Coconut Effect) due to the fact that the user is watching the image through a screen.note Unless it's flat. Which an increasing proportion of televisions are. Others feel that the lens flare has been overused and doesn't truly add anything to the image, other than distracting from the quality (or lack there of) of it.