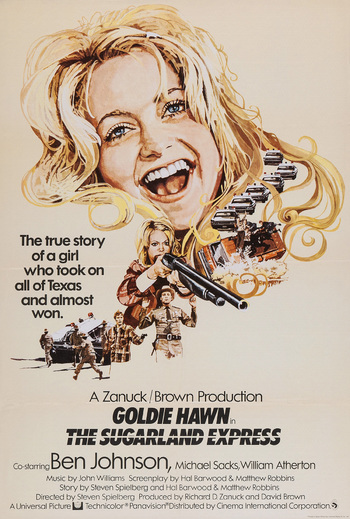 The Sugarland Express is a 1974 film directed by Steven Spielberg and starring Goldie Hawn.

Hawn is Lou Jean Poplin, a petty criminal two weeks out of jail, who arrives at the "pre-release" minimum-security facility holding her dimwitted husband Clovis (William Atherton), another petty criminal who has four months left on his sentence. Lou Jean insists on breaking Clovis out of jail immediately, because the government has taken their two-year-old son away and put him in foster care.

Lou Jean sneaks Clovis past the guards, and they hitch a ride, meaning to get to Sugarland, Texas, where their boy is living. But after a patrolman, Officer Slide (Michael Sacks), pulls their driver over for driving unsafely, Lou Jean panics and steals the car. She crashes it, but when Slide finds them she steals his gun and kidnaps him. This leads to an extraordinary low-speed chase, as Clovis and Lou Jean take Slide at gunpoint across Texas to Sugarland, as a caravan of police cars follows, and citizens turn out at the roadside to cheer the fugitives on.

The Sugarland Express is remembered today for being the feature debut for its director. Spielberg, 27 years old at the time, had been working in television since 1969, including the 1971 TV movie Duel. The Sugarland Express did poorly at the box office but didn't stop Spielberg from getting hired for his next project, Jaws. Sugarland is also notable for being the first film to use the Panaflex camera, a compact camera that allowed Spielberg to get complicated panning shots from inside a moving car. William Atherton later made a career out of playing obnoxious pricks in films like Die Hard and Ghostbusters.

The film is also noteworthy as the first collaboration of Spielberg and composer John Williams.