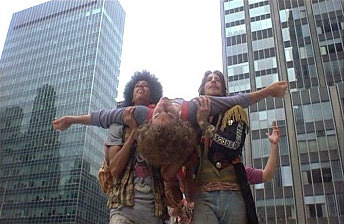 Far cheaper than clearing the busy Manhattan Street behind them — and looks good, too!
Advertisement:

You're shooting an After the End movie where almost everyone is gone, and the world has fallen into disrepair. You're telling the story of The Aloner or the last few people, so when you have to shoot in the city you can't have streets full of cars and people in the background. The thing is, clearing the streets of people, making sure lawns look unkempt, and other set dressing for the apocalypse can be expensive and takes a lot of time. How do you get around this but still film the characters outside?

You use a lot of shots from below the actors!note It doesn't have to be from below either. Low is most common, but shots from up high pointing down are used, too - it's just easier to keep the camera low than rent a crane. Gravity and all. This way you don't have to worry about the busy street behind the actors or the neatly-mown lawns (that should have been untouched for years) on the side of the road. All the audience will see is the tops of buildings (which would probably still be in okay shape), and treetops. You remove the sounds of traffic in editing and replace it with silence. As camera tricks go, you can't get much more simple.

Of course, it can be jarring when used too much or from too low an angle, making it feel like everything is being recorded from the point of view of a child - but when used with proper planning, you barely even notice. Competent directors simply make sure the characters in the foreground or the tall objects in the background are interesting enough and the audience will be distracted.

Also a convenient way to avoid catching undesirable advertisements (such as signs promoting a rival studio's or network's fare) in the background.

Less common these days in big-budget films as a background can be replaced with CGI. For instance, when Tom Hanks climbs to the top of the island in Cast Away, you can see in the DVD extras that he was in a parking lot, but this was replaced by CGI - this is not the trope because the angle was just for effect, not to obscure the parking lot, which was removed in post-production.

Compare with Dutch Angle (the camera is sometimes aiming upwards, and must be canted/tilted to create an uneasy atmosphere), Hitler Cam (the camera is aimed upwards to make one or more figures taller/physically imposing), and Knee-High Perspective (where the camera isn't angled, but is still close to the ground, creating the impression of a small perspective).