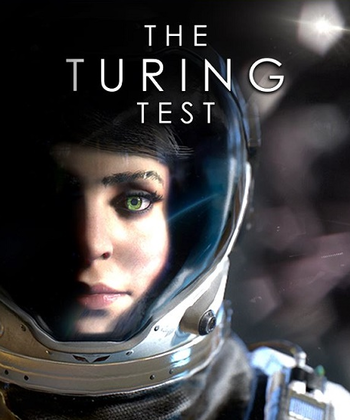 The Turing Test is a first-person puzzle video game developed by Bulkhead Interactive and published by Square Enix. The game was released for Windows and the Xbox One video game console in August 2016.
Advertisement:

It is the year 2246 when the player assumes the role of Ava Turing, an International Space Agency engineer in cryosleep aboard the Fortuna, a research and supply vessel in orbit over Europa, one of Jupiter's moons. Having been kept on ice for several years as a contingency measure in case of serious trouble planetside, Ava is awoken by the resident AI TOM to investigate the Europa research station that has gone dark, its crew of five missing. As Ava makes her way through increasingly elaborate puzzle rooms on her search for her friends, it quickly becomes apparent that things aren't as they initially seemed to be, and Ava soon finds herself faced with moral dilemmas that will decide over life and death not only for herself, but for all of mankind.

Gameplay-wise, The Turing Test's puzzles draw heavily from genre titans Portal and The Talos Principle. Distributing power to unlock doors is a major element, supplemented with staples like pressure plates, Hard Light bridges and Co. The player's primary tool is the EMT, a rifle-shaped gadget that can absorb and release up to three power globules of various functionalities, to be inserted in sockets to power up whatever machinery needs to be activated to clear the path forward.