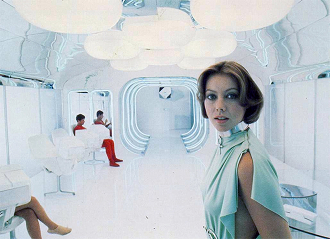 Locations set the mood of a scene just as much as the characters in it, and few locations say so much with so little as those with the Ascetic Aesthetic. A setting built with an Ascetic Aesthetic is "decorated" in a modern, minimalist and exceedingly clean style. Walls will likely be plain, featureless gray or white, perhaps with a light blue accent. Buildings will have either no curves at all, favouring a blocky and efficient feel, or have oddly sterile "organic" curves. Furniture will likely be plain and industrial, favoring function and comfort over style.

The net feeling these places will evoke is the absence of it. Rooms, buildings, and cities will seem cold and empty even when full of people. Though Minimalism

as a style can have a lot of character and personality, the Ascetic Aesthetic invokes an uneasy emptiness, be it of life (people are alienated), nature (nothing non-human lives there) or oppression (Dystopia loves this decorative statement).

The most extreme uses of this trope will be just one moving van away from becoming a White Void Room.

One of the main inspirations for this trope was the spotless whiteness of most NASA technology and spacesuits back in the day (which served the practical purpose of making it easier to see if equipment was damaged or contaminated in any way). This was very true in 2001: A Space Odyssey, which in turn helped solidify this aesthetic as "what The Future was supposed to look like" for the next decade or so.

This may be justified if it's a hospital, bio-laboratory or high tech factory where everything has to be clean, but usually goes a little farther in making the set dehumanizingly impersonal. Futuristic settings post Zeerust will usually embrace a form of this trope where Everything Is an iPod in the Future and there are Shiny-Looking Spaceships. Not surprisingly, the polar opposite of this trope is the Used Future, where the edges will be dented, the patina scratched, and the once angelic halogen lights will flicker if they still work at all.

Please note that authors don't always cover every inch of their settings with an Ascetic Aesthetic. It can be localized to just one room as easily as a planet. For this reason, stories that feature a place with an Ascetic Aesthetic will often be contrasted at one or more points with at least one homey, hearthy, or all-natural location, where the characters who are closer to Earth dwell. If two factions embrace these opposite aesthetic and philosophical views, expect Slobs Versus Snobs.

Another uses for this design aesthetic is that it doesn't distract viewers as much as homier or "busier" sets like the Bazaar of the Bizarre, turning the focus on characters and any significant decoration or out of place element. Like a flower pot, pet cat, dropped MacGuffin or blood covered wall. Because when something is out of place or has Gone Horribly Wrong in these locations, it's very easy to tell.

In the shiny end of Sliding Scale of Shiny Versus Gritty.