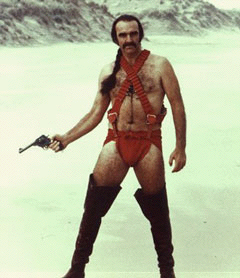 Sean Connery, as you really, really don't want to see him!
"You have been raised up from Brutality, to kill the Brutals who multiply, and are legion. To this end, Zardoz, your God, gave you the gift of the Gun. The Gun is good."
"The Penis is evil. The Penis shoots seeds, and makes new life to poison the Earth with a plague of men, as once it was. But the Gun shoots death and purifies the Earth of the filth of Brutals. Go forth, and kill! Zardoz has spoken!"
— Zardoz
Advertisement:

Zardoz, released in 1974, is neither a mindless sci-fi action movie nor a serious Science Fiction film à la Tarkovsky or Kubrick. It's... hard to describe, except to say its mind-melting imagery practically defines the concept of the Mind Screw. How Mind-screwy, you ask? What if we told you that it REALLY WAS made on drugs? Still, a plot summary may help.

It is 2293 AD. A post-apocalyptic Earth is inhabited mostly by the "Brutals", simple soil-tilling serf types, who are in turn overseen by Exterminators. These Exterminators worship the god Zardoz, a huge, flying, hollow stone head that dispenses weaponry and ammunition by the truckload. One day, an Exterminator named Zed (Sean Connery) gets swept up into the hollow stone head and finds himself in the presence of the Eternals, an elite class who, way back in the 20th century, discovered the secret to immortality and removed themselves from all that penis-having to the rarefied heights.

Life has become so meaningless for Eternals that Zed is hailed as manna from heaven. Some, however, see him as a dangerous threat to their status as higher beings. As it turns out, a lot of the Eternal scientists are female, with Consuella (Charlotte Rampling) leading the anti-Zed coalition, while May (Sara Kestelman) feels that studying an odd creature like Zed will answer numerous questions about how the Eternals evolved to their exalted status. They argue all this for a while. However, other Eternals, like Friend (John Alderton), have had quite enough of being immortal and start clamouring for Zed to kill them and end their awful tedium.

Fun fact: Writer-Director John Boorman wanted to adapt The Lord of the Rings, but that fell through. It's that project which inspired Zardoz (and his later Excalibur). It's a trippy dystopian fantasy full of psychotropics, philosophical something-or-another, and copious shots of topless women, made by a writer/director who, as previously mentioned, was on massive amounts of drugs during filming, to the point where even he doesn't know what half of the weirdness means.

design is an homage to Zed.

"Meditate on these Tropes at Second Level":