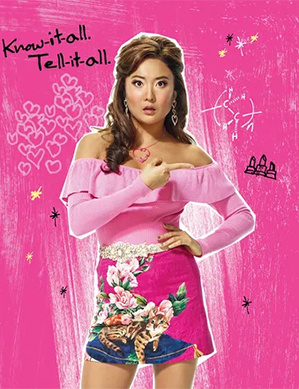 "If Regina is the sun / Then I'm a disco ball
'Cause I'm just as bright and fun / If you've had alcohol!"
"Fool me seven times, shame on you, fool me eight or more times, shame on me."
— Amy Wong, Ph.D, Futurama
Advertisement:

A stereotype used in various media, growing to prominence in The '90s and the Turn of the Millennium. More or less, the Asian equivalent of a Dumb Blonde.

The idea is this: you have Alice, who is of some East Asian ethnic group or another, usually the princess of an affluent immigrant business (or crime) family (many of the examples are rather specifically Chinese, with a distinctly Chinese last name), Alice is beautiful, photogenic, popular... but she's also vain and petty and dumber than a box of hair. Used as the de facto villain or the Alpha Bitch most of the time or if not as the dim witted sidekick for a major character, she is almost always contrasted by other characters who are demonstrably smarter, more capable, and less easily manipulated. Never the main character but sometimes a sympathetic one, Alice will at best be reduced to a running gag, and at worst portrayed as a villain.

The stereotype occurs in two types:

Note: male examples of this are tremendously rare. It is almost Always Female.

Compare with The Ditz and Valley Girl. Often the preferred type of Asian girls of fictional White guys.

Contrast with the usual "nerdy" portrayal of Asians in media, which this trope usually inverts (with some overlap), and Dragon Lady. Also contrast The Ojou and Yamato Nadeshiko, who generally tend to be smart and rich (and usually pleasant in personality.) Compare to Brainless Beauty (Type Twos), the Alpha Bitch and Rich Bitch (Type Ones).