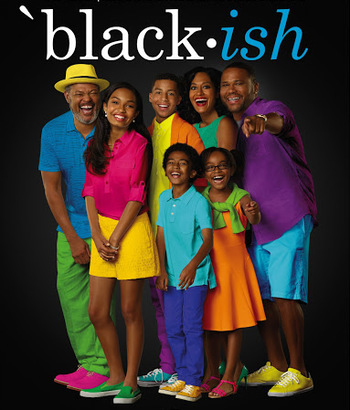 black•ish is an American dom com created by Kenya Barris, which premiered on ABC in 2014.

The series centers around Andre "Dre" Johnson, Sr. (Anthony Anderson), an ad executive, and his anesthesiologist wife Rainbow (Tracee Ellis Ross), as they raise their children while reconciling their status as a black family in an upper middle class environment.

black•ish was one of very few minority-led sitcoms to air on a major network when it premiered, and has since been regarded as having helped led a new wave of diversity in American television during The New '10s. Because of its subject matter, it's also considered something of a 2010s update of The Cosby Show, which discussed similar themes.

Due to its success, black•ish has also spawned a franchise of spinoffs. The first spinoff, grown•ish, which follows eldest daughter Zoey (Yara Shahidi) as she begins her college studies, premiered on Freeform in 2018. The second spinoff, mixed•ish, a Bow-centric prequel that follows her upbringing as a mixed-race child in The '80s, premiered on ABC in 2019 and ran for two seasons. There are a few spin-offs in development/development hell; old-ish (which ended up not getting picked up), that centered on Dre's parents Pops (Laurence Fishburne) and Ruby (Jenifer Lewis) and brown-ish, will follow a Latino family with Eva Longoria serving as a producer.