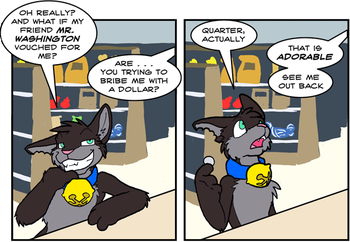 "Really? Is that it? You come here, and try to buy me over with pancakes? You're lucky I have a thing for pancakes."
—Lucifer, Helltaker
Advertisement:

Hey, you. Yes you. I'm looking for some... information. What, you can't disclose that? Maybe this shiny new quarter would change your mind...

This is when a character tries to bribe somebody, but the bribe is either pathetically small or involves something of no conceivable value to the recipient. Common reactions include an incredulous stare, dismissive laughter, or even arresting them for attempted bribery. Alternatively, the recipient may enthusiastically accept the bribe, much to the amusement of the audience. (A once-common form of this variant involved Canadians being bribed in American currency, although economics can largely ruin any humor it holds.)

Sometimes gets inverted; the initial bribe is very large, at least by the standards of the person offering it. The other character refuses it but accepts something comparatively worthless instead, maybe even making the reduced counter-offer themselves. This is more likely to be a dramatic example than the normal way around— typically because the person taking the "bribe" has reasons of their own to do what's asked of them, but wants to make a statement of some sort with the token payment. A specific example common in the real world is taking a single dollar (or local equivalent) as payment for services rendered; this is done because both sides have to give something in order for a legal contract to exist

. Such an absurdly small payment is referred to in legal parlance as a peppercorn

after the rent paid yearly by the Freemasons of Bermuda for their meeting hall: a single grain of black pepper.

Can also apply to unusually small payments, tips, or demands. Usually Played for Laughs. Contrast Worthless Yellow Rocks, where the characters treat something as being less valuable than it is, rather than more valuable. Compare Not Rare Over There, where something is valuable to someone, but only because they need it and can't find it, Comically Small Demand, and Sold His Soul for a Donut, where someone sells their soul for something comically insignificant. Compare Lint Value, where someone offers to pay for something with an incredibly small amount of money, usually because it's all they have.

Your Government Thanks You

Well, at least the general honestly thinks it was a good reward.

Your Government Thanks You

Well, at least the general honestly thinks it was a good reward.