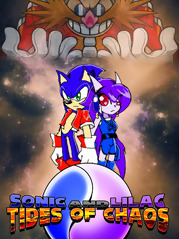 "I never truly thought we'd get visitors from another world so soon... It's only been a year..."

Sonic and Sash: Tides of Chaos (named Sonic and Lilac: Tides of Chaos in volume 1) is a crossover between the Freedom Planet and the Sonic the Hedgehog universe, written by SonicChaosEmerald

In volume 1, Dr. Eggman has become desperate as he is running low on energy, not enough to build his Space Station, the Death Egg Mk III. When Orbot, one of his two right hands, suggests to look for another viable energy source, their scanner quickly picks up the energy emitting from planet Avalice; a source of energy stated to have nearly as much as the Master Emerald itself. Unable to move the Death Egg in its current state, Eggman decides to take the planet Avalice out of its orbit and warp it through the use of a dimensional hole to the vicinty of Mobius.

In the process, the seven Chaos Emeralds get shattered accross the now neighboring planet. With the Emeralds falling from the sky, it doesn't take too long for Lilac and her friends to notice their sudden appearance, which starts the search for them all over again.

The fan fiction can be read on FanFiction