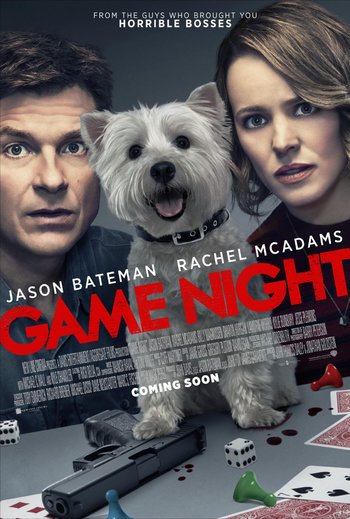 Game Night is an 2018 American Black Comedy with some mystery and thriller elements, directed by John Francis Daley and Jonathan Goldstein and written by Mark Perez.

Max Davis (Jason Bateman) and his wife Annie (Rachel McAdams) are a Happily Married suburban couple with a mutual love of competition, which has led them to host a long-running couples’ game night at their home. Unfortunately, Max and Annie are having trouble conceiving, which their doctor attributes to stress, due in no small part to the sudden arrival of Max’s overbearing, one-upping brother Brooks in town. Brooks crashes game night and invites his brother’s group over to his house the following week for a game night that he promises will “raise the stakes.” Annie encourages Max to attend and beat Brooks at his own game as a means of getting over his mental block.

When the big night arrives, Brooks reveals that the game is going to be a murder mystery. As armed men barge in and drag Brooks away, Max and his friends initially think it’s All Part of the Show; turns out it’s a very real abduction, and Max will have to solve the mystery fast if he doesn’t want to turn it into a murder.