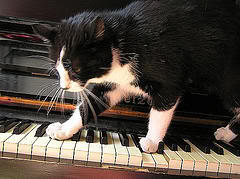 The mouse will never see it coming.
"I will have to use stealth instead" said L and jumped in the broken window screaming.
— Light and Dark The Adventures of Dark Yagami
Advertisement:

When a potentially deadly and effective strategy is ruined (or logically should be but comically isn't) by the conspicuous way it is acted upon. Usually by a Battle Cry, an Attack Call, a Pre-Asskicking One-Liner or something similar. Needless to say, characters who carry out this trope frequently cross into Too Dumb to Live territory, or at the very least aren't the sharpest tools in the shed.

The calling card of Highly Visible Ninja. Compare So Much for Stealth, when some small indication blows one's cover, and Leeroy Jenkins, when one idiot ruins the careful plans of the rest of the party. Particularly spectacular versions of this trope may involve bursting through a nearby window or wall.

Trope Namer is a song from The Pirates of Penzance, which is all about parodying this trope.

Some trope examples! I'LL STEAL THEM! NO ONE WILL EVER KNOW!:

By this point, Marvin and Whizzer have heard them, and welcome the two in to complete the romantic quarter.