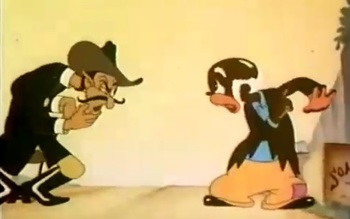 "My body might belong to you, but my soul belongs to Warner Brothers!"

Uncle Tom's Bungalow is an 8-minute long Merrie Melodies animated cartoon short directed by Tex Avery, and released on June 5, 1937 by Warner Bros. It is a parody of Uncle Tom's Cabin and of the "plantation melodrama" genre of the 1930s.

Simon Simon Legree, a greedy used slaves trader, sells the old Uncle Tom to Little Eva (a young white girl) and Topsy (a young black girl) on layaway — the girls bought him to save him from being whipped. Comes the winter, Legree finds out that the girls have missed their last three payments and sets out to get his money or take Uncle Tom back. The girls hide Uncle Tom upon learning of Legree's arrival and Eliza, a slave housemaid, whisks them away and a chase ensues.

The short was included in the Censored Eleven due to the many stereotypical portrayals of black characters it contains. Not to be confused with Uncle Tom's Cabana, made ten years later for MGM Studios, and also banned (but not part of the Eleven).