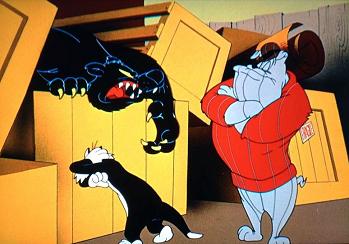 "Tree for Two" is a 1952 Looney Tunes short directed by Friz Freleng. Spike is a big tough bulldog, and Chester is his worshipful terrier sidekick. One day the two dogs, looking for something to do, decide to beat up a cat. They encounter Sylvester, here without Tweety, who runs and hides in an old junkyard. Spike goes into the junkyard to beat up Sylvester, but what he doesn't know is that a black panther that recently escaped from a zoo is also hiding there. Spike keeps getting beaten up by the panther, to the consternation of Chester, who finds Sylvester instead and beats him up. At the end, Spike, convinced that Chester is tougher than he is, is now Chester's worshipful sidekick.

"Tree for Two" provides examples of: