Film / Set It Off 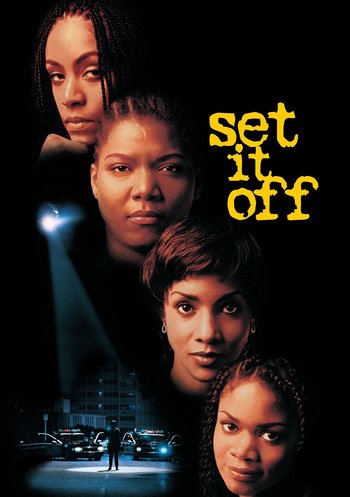 The only breaks you get are the ones you take.
Advertisement:

Frankie Sutton (Vivica A. Fox) is an ordinary bank teller who is unfortunate enough to be behind the desk on the day that a group of bank robbers hit her place of work. The robbery goes wrong, with several people, including one of the robbers, ending up dead. To make her day even worse, the bank fires her for an arbitrary "breach of protocol" after the police reveal that she knew one of the robbers in front of her boss. With no job, no money, and her life spiralling out of control, she joins her friends Cleo (Latifah), Stony (Pinkett), and T.T. (Elise) working meager, minimum wage jobs as janitors under their foul-mouthed, abusive boss Luther. After Stony's brother Stevie is gunned down and T.T.'s son is taken by the CPS after suffering an accident at her job, Frankie comes up with a plan to get them the finances they need to survive—by taking it from her former employers.

Their first robbery goes off without a hitch, and the women find themselves with more cash than they possibly could have imagined. Unfortunately, their ill-gotten gains threaten to cause a rift between the friends, as some are worried about the consequences of becoming criminals, while others are driven by greed to hit more banks. Not making things any easier is LAPD Detective Strode (John C. McGinley), who is determined to put a stop to this new group of would-be fugitives and end their crime spree before it begins.