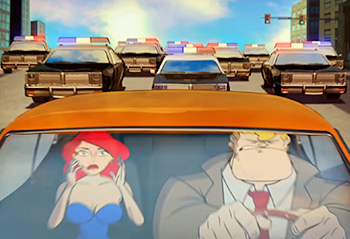 "Suspect believed to be in possession of fresh baker's dozen, over."
"All this for a loaf of bread?"
— Aladdin, Aladdin
Advertisement:

Police officers will engage in high speed pursuits involving dozens of patrol cars for the flimsiest of reasons. No TV police force has a "Do not pursue" policy for minor crimes. Officers involved in the chase are usually Lemming Cops and are poor drivers who crash very easily. Sometimes the police might use more advanced tactics like spike strips and roadblocks, but these rarely are successful in fiction, either against the heroes or the villains.

The name comes from an old legal principle that law enforcement from one jurisdiction can work within another if they are in active pursuit of a fleeing suspect, and can arrest said suspect on private property without a warrant.

In Real Life, people who flee from police when facing a minor moving violation have often committed other crimes, evidence of which will be found when they are stopped. A person who flees police is likely to either be driving on a suspended license, be driving under the influence of alcohol or drugs, have warrants out for their arrest, or have drugs, illegal weapons, dead bodies, and/or kidnapped children in the vehicle. Thus, there is some Truth in Television, but not to the degree usually shown.

Well hey, hey, Mister Policeman! Bet I can drive faster'n you can!